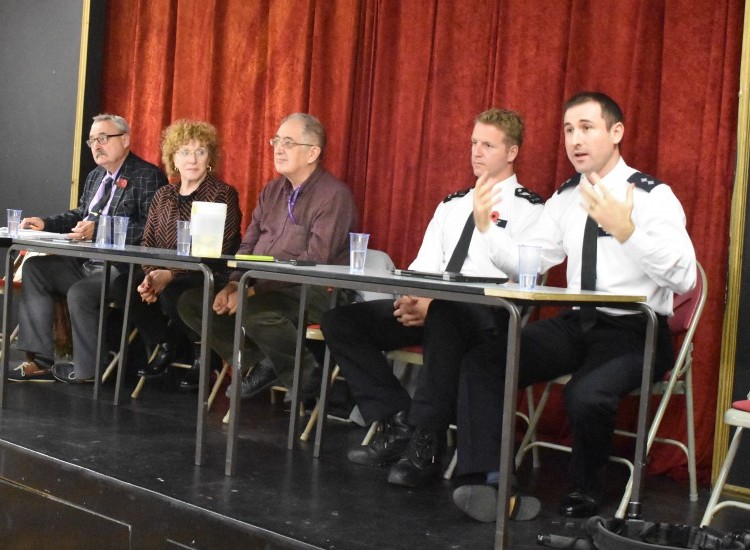 Last Thursday we hosted a follow up to our well attended Summer public meeting on tackling local anti-social behaviour. We correctly anticipated a bigger turnout for this event, so we held it at the nearby Clarence Hall. The panel included our CEO Eleanor Botrwright, Castlehaven Board Member Derek Jarman, Inspector Richard Berns and Sargent David Hodges from Camden Police, and Camden Councillors Cllr Lazzaro Pietragnol and Cllr Richard Cotton.  The meeting provided local residents with the opportunity to meet the Camden Police Safer Neighbourhoods team, a new force of 7 officers whose jurisdiction falls solely within the Camden Town and Primrose Hill Ward. This new team will be a visible police presence on Camden’s streets. The head of the team - David Hodges -  stressed the importance of residents reporting crime, no matter how small, as this can be used as evidence. If you witness a crime in the local area you should report it directly to Sgt Hodges by emailing DAVE.J.Hodges@met.police.uk.

One topic of discussion was the recent police operation that targeted drug dealers who supply Camden High Street and the surrounding areas. The police action led to the arrest of 41 dealers, many of which have been charged, and some have already pled guilty. The police noted that the operation hasn’t completely resolved the issue of drug dealing in Camden, but they believe it’s a step in the right direction.

Many subjects were discussed, ranging from other crimes in the area to the general nature of Camden. The meeting displayed residents’ willingness to work together to combat ASB. Attendees were encouraged to join the Camden Safer Neighbourhood Board, a community led charity that wants to reduce crime by encouraging cooperation between residents, police and council.

We organised the two meetings on tackling local ASB due to a terrible summer, the worst our CEO Eleanor can remember. The fall in temperature and recent police operations have made a noticeable improvement to the local area, but more work needs to be done. Castlehaven will remain actively involved in the fight against ASB, by working with our community and the police.

How we are Helping the Local Environment